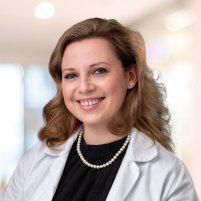 Viktoriya Krepkiy, DPM, is a new podiatrist joining the team at Bay Area Foot Care, serving patients in San Rafael, California, and the Inner Richmond and NoPa neighborhoods of San Francisco. She's board-qualified in podiatric surgery by the American Board of Podiatric Medicine. Dr. Krepkiy attended the University of California, Berkeley, where she received a Bachelor of Science in Microbial Biology. In 2016, she earned her Doctor of Podiatric Medicine from the California School of Podiatric Medicine at Samuel Merritt University in Oakland, California. She completed her residency as the chief resident at VA Puget Sound Health Care System in Seattle, Washington. Her ongoing interest in wound care and limb preservation led her back to the bay area, where she completed a Limb Preservation Fellowship at the University of California, San Francisco (UCSF). At UCSF, she worked along with vascular surgeons to prevent lower limb amputation. Dr. Krepkiy specializes in wound care, limb preservation, and elective forefoot surgery. She has a particular interest in treating lower extremity wounds in order to prevent lower-extremity amputations. When not practicing podiatry, Dr. Krepkiy is passionate about cooking, has appeared on an international cooking show, and has a cooking blog, but mostly enjoys treating her friends and family. Dr. Krepkiy was born in Odessa, Ukraine, and is fluent in Russian. She is proud to be serving the bay area community in both English and Russian.